Iceland is cold. Not even a little cold, no. It’s really cold. And windy. Dark rolling clouds over rocky volcanic fields or double rainbow over yellow meadows by the sea, Iceland has a way of taking you straight to the gates of Hell or to Paradise City (where the grass is not green but the girls are pretty). In a nutshell, it’s a giant volcanic island filled with smelly geysers, imperial glaciers, dark lava fields, stunning deep blue ice caves, and black sand beaches. And mystical dwarf creatures, hiding in holes. Full of geological phenomena, it’s a land of volcanoes that are usually called something-jökull, the most famous one being Eyjafjallajökull. That big pile of dirt went berserk in 2010, made the headlines for a few days, completely revolutionized the Icelandic marketing strategy for souvenirs and gifts – Eyjafja-shirts, Eyjafja-mugs, Eyjafja-magnets – and became a new word play for tourists. It’s a land of contrasts, of natural wonders and of unpredictable weather. As a matter of fact, if you don’t like the Icelandic weather … just wait 5 minutes. 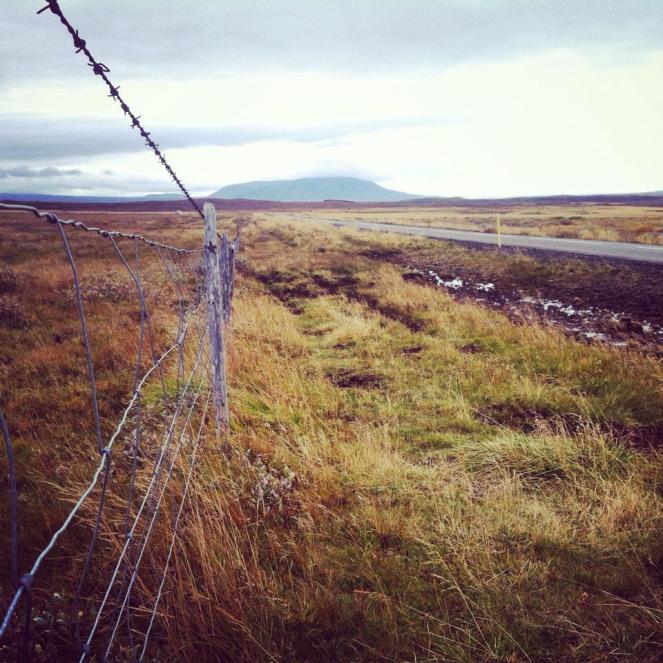 Between fire and ice, earth and sky and between two continents, it’s also one of the most authentic and raw countries I have ever visited, literally (see Þhingvellir). I expected a deserted landscape with pretty ponies and tall bearded Vikings but what I found was much more than that. It was dramatic, Dantesque, impressive, powerful and intense at the same time. Everything about Iceland is intense: the weather, the landscape, the food, the hospitality and the degree of trust of the Icelandic people. To mention but one story, we were driving towards the Eastern Fjords and I called Berunes hostel to book two beds for the same night. The owner told me that she had to go back to Reykjavik that evening for some personal reasons and couldn’t be there to welcome us… But she spontaneously offered to leave the keys for us to find, told us to make ourselves at home and to leave the money under the pillow as she was coming back the next day. We found ourselves alone in a remote part of Iceland, and that’s saying something, with the purest silence and the darkest night to surround us, ready to spend a very quiet night in a picturesque wooden cabin facing the sea. How many people do you know would, in a heartbeat, leave the keys for 2 complete strangers to spend the night at their place when they’re out of town? We had heard of the famous Icelandic hospitality but such generosity and blind trust took us by surprise and restored our damaged faith in humanity. Iceland really is a country of surprises.

Our journey started in Reykjavik, the clean, modern, flat and colorful capital that looks like a cute lego town caught in a psychedelic dream. This big fishing village town is full of creative pubs with eccentric decors such as The Big Lebowksy Bar and the Chuck Norris Bar, hipster bars with lofty looks, brick walls and wooden floors, and organic restaurants offering a large panel of super healthy seafood and meat. We had, hands down, THE best experience at Höfnin, from start to finish. The service, the quality, the setting and the wonderful view over the harbor, everything was top notch. And the food… the FOOD! The creamy spicy corn soup with bacon crisps and soybean sprouts was perfectly divine. The lamb and pan-fried potatoes with mustard dressing, Icelandic mushrooms, carrot purée and red wine sauce was beyond description. 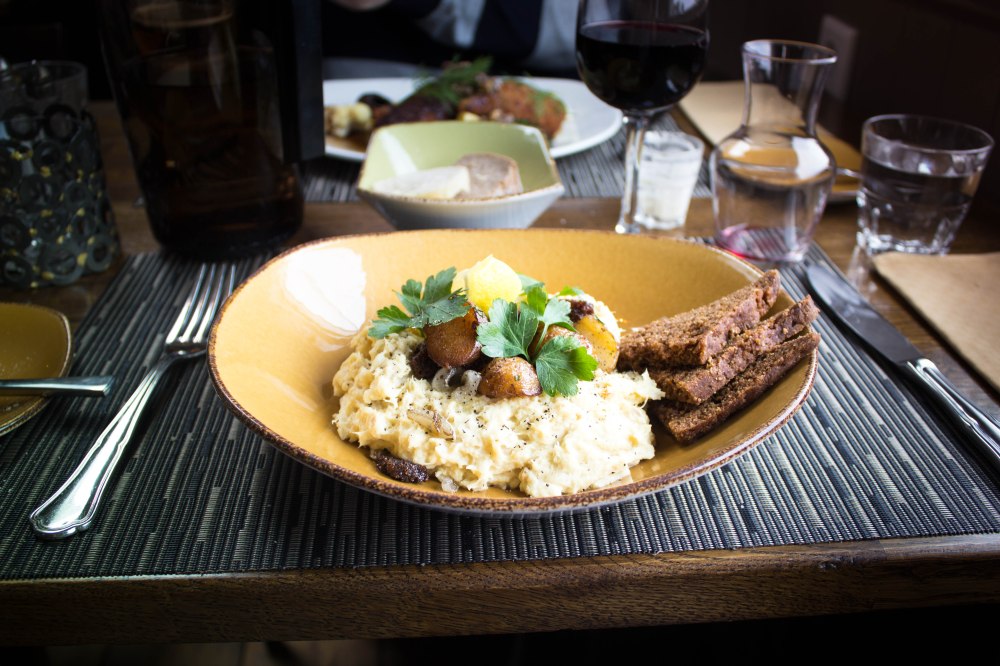 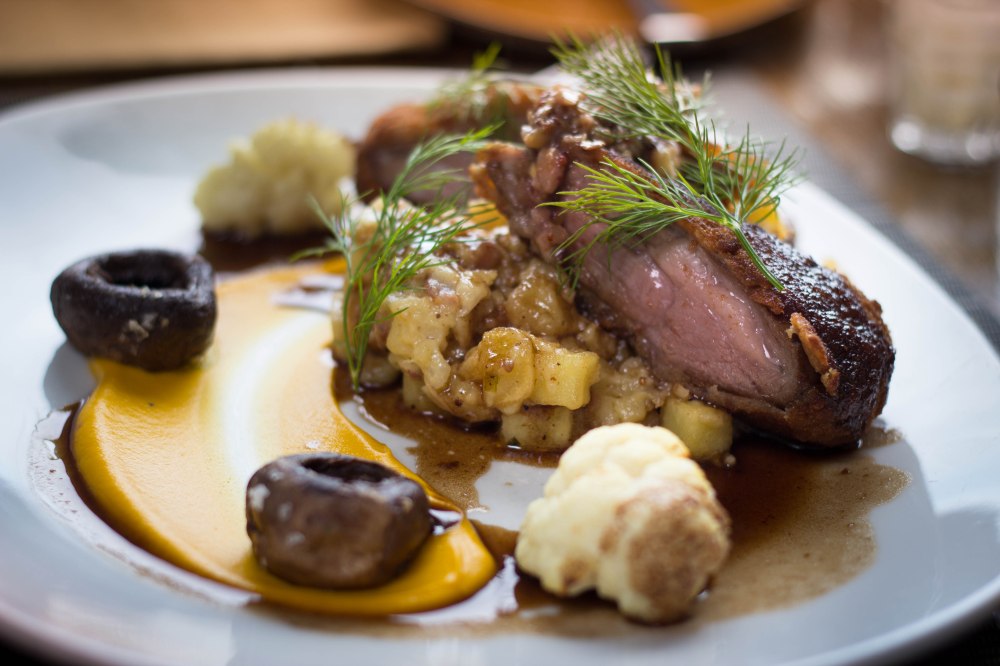 In Reykjavik, teahouses and coffee shops are everywhere and always have the tastiest warm cheesecakes, hot beverages, you know, the kind you crave on a cold winter night? Well, in Iceland, it’s kind of winter all year long. The main street, Laugavegur, is a picturesque and pleasant walk down to the waterfront, brightened up by pretty trees covered with light strings and colorful wooden stores like Cape Cod meets Cork in Scandinavia. The palpable artistic vibe that oozes from Reykjavik often makes me think of Copenhagen, on so many levels. Painted house facades, themed bars, nerd stores selling the weirdest t-shirts and gadgets, and local chains selling all sorts of flashy outdoor gear to prepare for a trek in the harsh countryside. Modern and dynamic as it may have become, the city has preserved its ancient ‘fishermen village’ feel to create a homogeneous atmosphere that makes it very different from most European capitals.

Reykjavik is surrounded by white-capped mountains, stuck between the Reykjanes peninsula and the rest of the Island, Reykjavik is a few kilometers from the overpriced Blue Lagoon which was going to be our first stop out of the capital. We had arranged to rent a car directly from a local, a young Viking who had found my post on Couchsurfing and was willing to rent us his car for the week. We met at a local Coffee house where we got acquainted. We took the car, an automatic 1998 Toyota, for a test run to the Blue Lagoon, 40 minutes from the city center through deserted black lava fields. The Blue Lagoon is a natural-ish geological quasi-wonder (as described by Matt) of creamy pale blue hot water and an extremely profitable business as well. We covered our face with silica mud, enjoyed the ethereal atmosphere of the lagoon and simmered in the 37C outdoor geothermal pool until sunset – a rather apocalyptic sunset of dark clouds, wind and bright lights. We then left the eerie milky pond and headed back to Reykjavik but had to stop after a few minutes to pick-up one of the car’s side mirrors which had suddenly fallen off. Iceland had claimed her first victim. 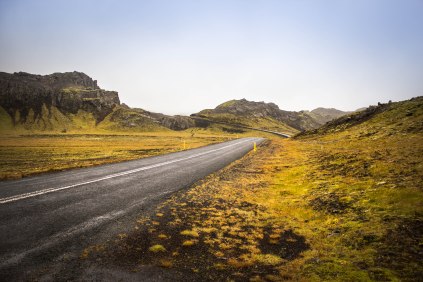 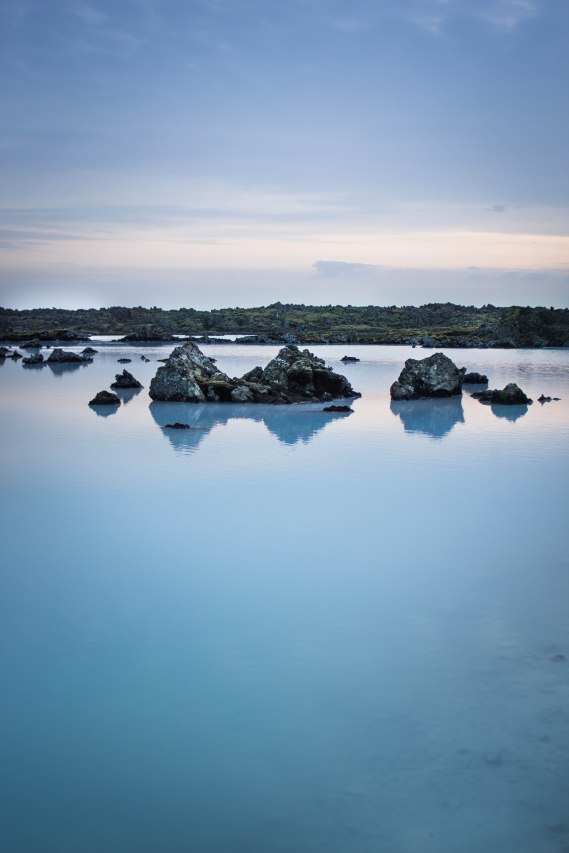 I couldn’t take my eyes off the Mordor-like scenery all the way back to Reykjavik. Our first encounter with the rugged, dented terrain of the Reykjanes peninsula confirmed our expectations; Iceland was going to be rough, extreme, chaotic, cosmic even. In a word, different from anything we had ever seen before.

The next morning we hit the road, direction the Ô so famous Golden Circle: Thingvellir, Gullfoss and Geysir. To be continued. 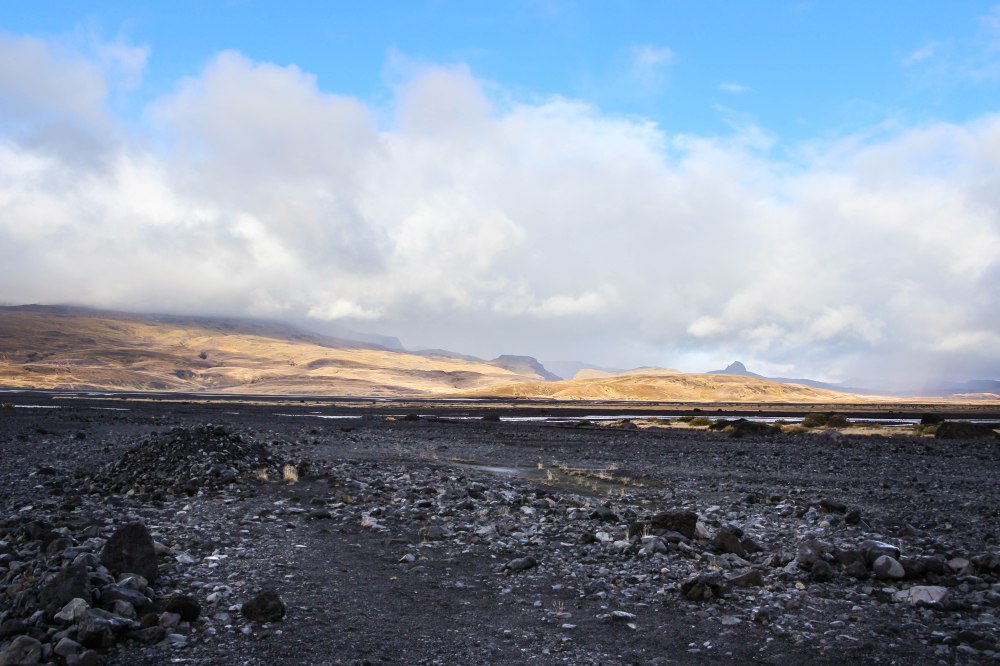