Sure, we all remember the first atomic bomb in Hiroshima like it was yesterday and we all sing alone « Enola Gay, you should’ve stayed at home yesterday… ». Yes, it’s still extremely painful and sad to think about – just ask Wolverine, he was there in ‘45. But heck no, it’s not the only reason why you should spend a couple of days there. It is also a modern, elegant and chill city with its eerie Peace Memorial Park and its castle, the famous Hiroshima okonomiyaki and the many streetcars crisscrossing around the city. 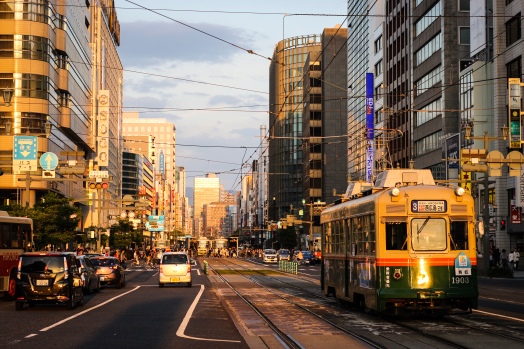 Stroll in the city center

A breath of fresh air in the middle of a concrete jungle, Peace Memorial Park is surrounded by rivers and directly faces the Bomb Dome. From the other side of the river you’ll get a very nice view of the remains of the dome surrounded by new buildings, clear contrast between the old and the new. I thought it was best enjoyed at sunset after a warm day of walking around Miyajima island.

Sunset over the Dome

The new and the old

Fun fact: a part of the population of Hiroshima wanted the dome to be taken down because it was a constant reminder of the tragedy and brought back painful memories. Another part of the population wanted the dome to stay and become an international symbol of world peace. Well, it’s still here today – a blast from the past and a symbolic message of hope. 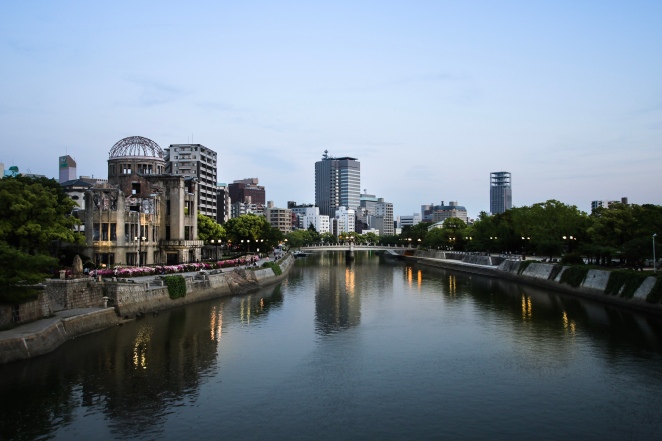 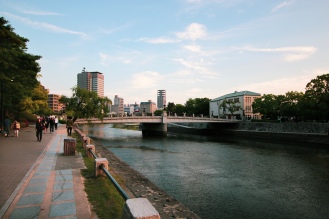 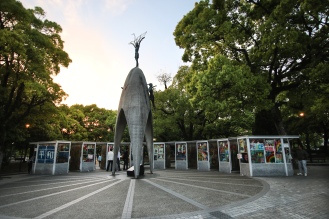 Across the river, as you walk into the park, the Children’s Peace Monument is just a stone’s throw away. A bit further into the park you’ll find the Pond of Peace and the Flame of Peace. Eva and I sat down on a bench in that park to have sushi in the evening.

The parks and gardens in Hiroshima are also quite nice. Hijiyama Park is said to be peaceful and leafy just as we like, and the Central Park of Hiroshima is where you’ll find the museum of art and the seasonal fairs and exhibition – there was a Beer and Meat Fest when we were there!

Shukkeien Garden is one of the discounted attractions in the Hiroshima Pass (200¥ instead of 260¥). It’s a haven of small wooden bridges, stoney rocks to hop on and pathways that circle a peaceful pond where well-fed koi fish beg for more food. Flowers, green hillies and a couple mini pagodas, don’t miss it!

From Shukkeien Garden you’re about 800m from the heart of the city, the famous castle of Hiroshima – where it all began. With the Hiroshima pass you will pay 280¥ instead of 380¥. As far as museum goes, this one is quite okay: historical drawings, family paintings, poems, insight on Japanese castle construction and defense, an interactive hologram video that retraces how the castle was built 4 centuries ago, some katanas and artifact on display. As you reach the last floor, you’ll also get a 360 view of Hiroshima from the top. Don’t forget to try on a samurai helmet and armor on first floor – and to post that picture on Instagram. Obviously.

A drink and a snack standing at the bar

At nightfall, find a local bar and restaurant to have snack and a ginger highball while standing at the bar with the locals. Eva and I went to Uotora 魚寅 (5-５ Fukuromachi, Naka Ward, Hiroshima, Hiroshima Prefecture 730-0036) and had a ginger Jim Beams with a plate of duck slices (480¥) and a bowl beef stew with mushrooms (300¥). A proper meat treat! Cooked to perfection and the sauce, oh the sauce!! One thing is for sure, when it comes to meat, the Japanese know what they’re doing. 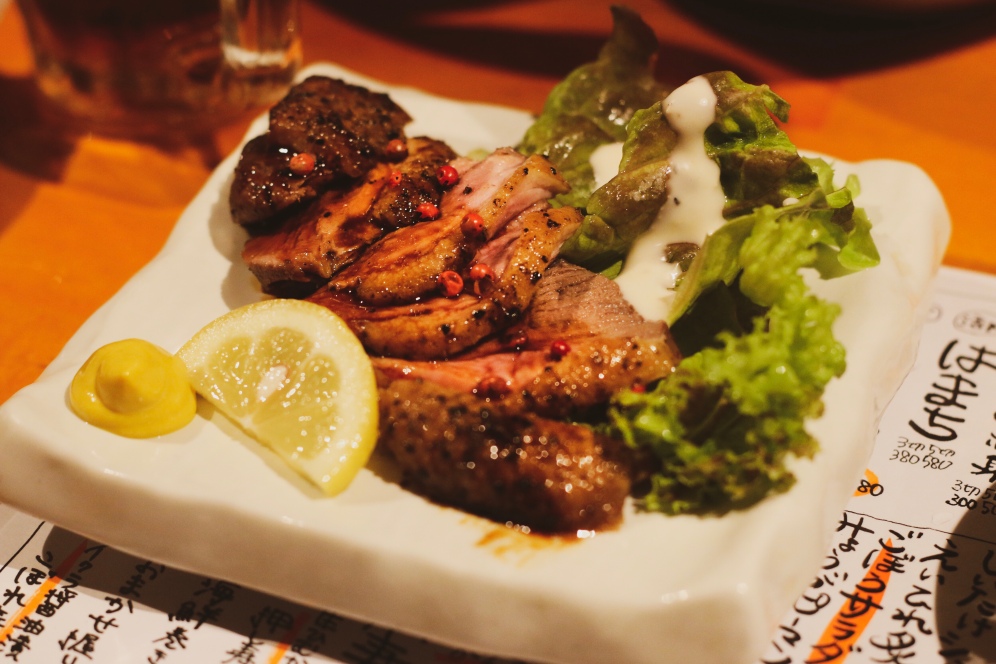 If you’re still hungry, head to Torino Suke for a bowl of spicy ramen or gyoza. It’s located at the corner of a busy boulevard and a shopping gallery, in the heart of the shopping district.

First you have to select your food at the machine (pictures with description in English), slide s few coins in the machine, give the chef your ticket and have a seat at the counter. 5 minutes later you’re slurping on a warm bowl of ramen and one plate of crispy gyoza.

From Hiroshima Train station take trams 1, 2 or 6. Tram 5 will take you to the port (that was my mistake).